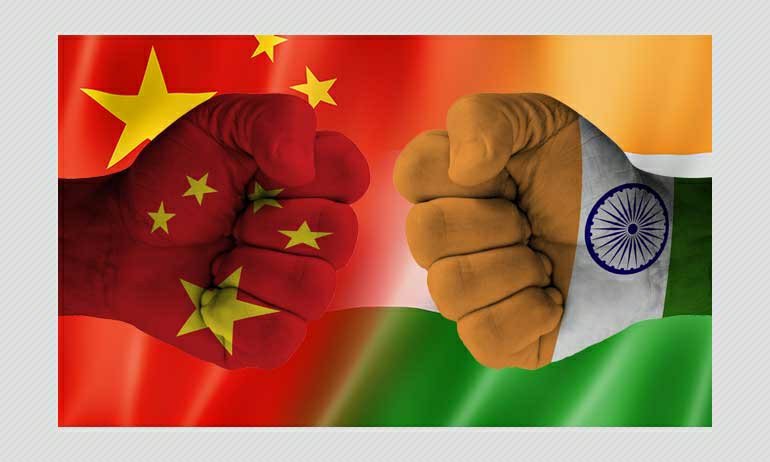 The world is eagerly looking at yet another age old heated up rivalry between the two Asian giants, whilst the Great Himalayas are witnessing a major military bloodshed after two decades, the last one being the Indo-Pak skirmishes of Kargil in 1999. The timing of occurence points finger mostly to China, as it is caught in a myriad of problems including the mishandling of corona virus, Hongkong policies and aggression against Taiwan and the south china sea controversies with its neighbours. The analysts term it as a ‘Muscle Flexing by China’ on its path of acquiring a “Superpower” status.

India shares a long border of 3,488km with China spread althrough the Himalayas and divided into 3 sectors the northern (Ladakh), middle(Himachal & Uttarakhand) and eastern(Arunachal Pradesh). Although face-offs and stand-offs are kind of usual business in the region, the current context acquires specific importance due to its wide geographical spread and simultaneous occurences. The contentions occuring at different points are mostly because of the unsettled boundaries and perception differences. Due to differing perceptions troops cross each others territories during patrols and are sometimes caught in face-offs, which then will be solved at the local level by military commander through delegations and discussions.

The history of the disputes dates back to the colonial era, British India and the Tibetan Empire where they accepted McMahon line in the east as the boundary in 1919. The middle sector also had settled borders while the Ladakh which was not a part of British India, but part of the British Empire sharing border with Xinjiang province had undemarcated borders. Ladakh was part of the J&K ruled by the Dogras and they possessed a map with boundaries, that India claims today and not accepted by the Chinese. When J&K acceded to India in 1947, this map was transferred to India. When the actual cartographic exercise of India was concluded in 1950 with its onground marking under Sardar Vallabhai Patel, they released two white papers, but in both of them the eastern boundaries of Ladakh was demarcated as undefined and as to the area upto which both sides exercised actual control. Nehru, in 1954, wanted to revisit the maps and told the officials to properly define the boundaries according to historical evidences and cartographic proofs and the maps so obtained were to be printed in textbooks and other documents. Thus the map passed on by J&K as of marked in current India’s map was adapted and the process was completed.

In 1951, China annexed Tibet, which according to the Chinese, the Tibetan palm. In the late 1950s, there was repeated requests from the Chinese premier Zhou Enlai to discuss the boundary disputes with Nehru which was ignored as Nehru thought altering the boundaries would lead to ceding the land in Chinese favour which would not acceptable to India. Repeated denials from India and its action of giving to asylum to Dalai Lama led eventually to the 1962 war, which was least expected and the result was a humiliating defeat to India. After the war, the PLA was ordered by China to retreat back 20kms from the LAC according to the Chinese perception thereby creating a virtual demilitarized zone.

The historic visit of Rajiv Gandhi to Beijing in 1988 opened the possibility of talks and a new chapter in India-China relations. Deng Xiaoping, the founder of modern china, a visionary scrolled that the India-China cooperation is the base for an Asian century. The uptick of relations from then on led to the signing of Border Peace and Tranquility Agreement in 1993, and ban on fire arms in LAC in 1996. The relations maintained an upward trajectory till the rise of Xi Jinping in 2013.

Xi Jinping did not believe in Deng Xiaoping’s idea of peaceful rise and wanted to flex the muscles. The 2013 incursions of PLA in Depsang marked the Chinese policy shift and the strategic bottlenecks that India will have to face. Although easing the standoff was a diplomatic victory to India,it realized the depth of its underestimation and ramped up its border infrastructure construction along the LAC, which underwent decades of neglect and was moving at snails pace.

The heat of incursions was not alone confined to the Indian border, but was felt along the South China sea for its maritime neighbors including Vietnam and Philippines. Termed by China, as was routine patrols intially for its vessels traversing, the mood soon changed to building artificial islands and claiming Exclusive Economic Zone and navy deployment. The retreat of US, post the insurrection of Trump and his transactional diplomacies,led to a strategic shift across the Indo Pacific with the diminishing role of a Net Security Provider along the Indo Pacific betrayed countries like Japan and Philippines which stationed the US troops.

The Trump policies along with the increasing closeness of India towards the US camp and the formation of QUAD ( US, India, Japan,Australia) which is seen as an anti-China grouping fuelled the insecurities of China. China leveraged the opportunities to expand its wings and unveiled the grand BELT & ROAD INTIATIVE, to revive the ancient silk route through road and maritime connectivity.

India, the great home of ancient civilizations, vedic knowledge and a rich cultural diversity and history. From the faultering colonial past, the post independence progress it has made, led to India becoming a global leader and the 5th largest economy in the world, 4th largest military power in the world and a nuclear state.

But the fault lines within the Indian administration and progress it has made were clearly exposed by the pandemic. Low investment in healthcare sector by consecutive governments (around 1% of GDP) and the widespread undernutrition and wealth inequalities made them vulnerable to the pandemic. Although India is a large economy, it is a misleading concept because the humongous 1.35 billion people aggregates to it. The percapita income which is much more conducive measure defines it as a low to middle income country and attributes to the inequality prevailing and growing in the country. Over crowded cities like Mumbai, Delhi, Ahmedabad, Chennai adds to its vulnerability potential.

The first wave of infections hit India during the last week of January, when students returned from Wuhan to the Indian state of Kerala. Kerala, but was an exception among Indian states and its much praised health infrastructure was well prepared to deal with the pandemic. They contained the disease within 3 cases, all of them imported without any contact spread.

The second wave too hit Kerala first, imported cases from Italy, who evaded the surveillance in Airports and led to a cluster which led to many contact spread. By the time cases were reported from Maharashtra and a few other states too. The PM Narendra Modi declared a nation wide lockdown on 24th March with a prior notice of just 4 hours, the harshest and the largest lockdown in the entire world.

Cases rose evenly and linearly with its pace decreased, but threat hidden. The lockdown saw the largest humanitarian crisis ever since India’s partition in 1947, and internal migrant labourers started fleeing to their home states, by foot and cycles throughout the length and breadth of India, due to loss of livelihoods, jobs, food and income. Although there were repeated calls from the govt to make them stay indoors and avoid travelling, mere words and consolation could not match the money and food required to sustain life within their flesh and bones. Many dead on the way in accidents, train runovers, starving and ailing. A lot of them contracted the disease on the way. Initial hesitation and ill treatment by many state governments, underscored the discrimination and unidentity these people faced.

The rate of disease climbed up in the country, the city of Mumbai & the state of Maharashtra being the worst affected. Many states ramped up testing rates, developed Covid hospitals and equipped their health workers. But, the short period of ramping up was not enough to cover up the years long neglect this sector faced. Soon many health workers including doctors contracted the disease, there were widespread shortages of protective equipments and hospital beds.

By the end of May, 4 consecutive versions of lockdown extending for more than 60 days were coming to an end and it was devastated the already ailing economies and livelihoods. The financial package announced by the govt, remains a question mark in the lives of Indian populligentsia, as to how it will act in short term to revive the economy. The first week of June, with the relaxation of lockdown restrictions, saw the cases crossing 2 lakh and tolls close to 8000 and the progression of cases changing from linear to geometric. Experts are pointing to the community transmission that has already set in, but the govt is in denial and continue easing lockdown.

For a country like India, this is a watershed moment in its administrative career, to look back and introspect the wrongdoings and neglects of the past and To reorient itself to focus more on people centered policies and welfare measures. As the social intellectuals put it, “India needs to look upon its policies as to what benefits its people directly rather than what benefits foreign companies and through them the people because ultimately what matters in a democracy is its individual building block and built on them the collective good.”

It was in the late December that we the world came to know of an influenza like disease spreading all over China killing hundreds. It was believed to have originated in the Chinese city of Wuhan, and later the cluster was localized to be an animal market there. The modern Chinese medical infrastructure was ramped up, the genome of the causative organism was sequenced and was found to be similar to the corona virus of 2003 which caused SARS outbreak and WHO named it as novel corona virus or Covid- 19.

There was repeated denial from both China and WHO regarding the human to human transmission potential of the Virus, intially, failing the world to prepare and caution themselves for a pandemic and preventing them to take precautionary restrictions. By the end of December, the first case outside China was reported in its neighborhood of Thailand. By January, cases started reporting from Italy, a country which maintains close ties with China and soon the spread of the disease accelerated.

The whole of Europe including major economies of UK, Spain, Italy, France was swallowed by the virus and people were in shackles. All of them followed the authoritarian invention of “lockdown technique” , an extreme form to maintain social distancing across their countries.

Italy faced the brunt of the disease count in Europe and started grappling inspite of its well equipped health system. Soon, with the overwhelming number of patients, led to the collapse of health system and thereby increasing the fatality rate, transforming the world famous romantic destinations into graveyards of loved ones. High case fatalities were recorded all across Europe with epicentres of death changing from Italy to Spain to France and finally to UK, where even the PM of UK, Boris Johnson contracted the disease.

In US, by the time a few localised clusters were being reported, the numbers were slowly climbing up and the President Donald Trump was in denial and hesitant to take stringent measures for the containment of the disease. He continued his hate speeches and blabbering in the White House press briefings switching opinions within no time. He participated in the Namaste Trump event in India on Feb 26 where lakhs participated both local and foreign. The contours soon changed when the epicenter soon changed, post mid march to the US global city of New York, where the disease spread like wildfire and by the time there was nothing he could do. The doubling time was so less and fatality rate too climbed up devastating the mostly privatized health system of US.

In Part – 2, the Indian Conundrum